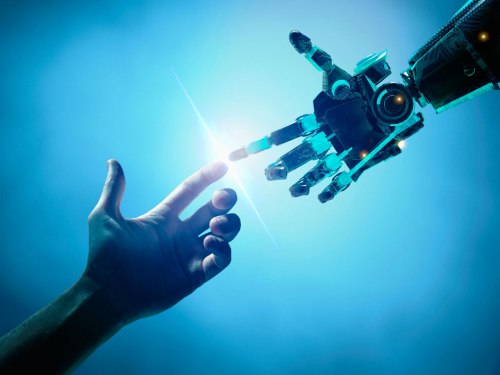 Every day I read more and more about the advancement of AI Robots.  Scientists believe that they are very close to programming the “bots” so they are sentient.

Of course, the goal has always been to create “Sophia” type AI robots which are hardly distinguishable from human beings.

China is using an AI bot as a news anchor:

The Creation of Man and Woman

“Then God said, “Let Us make man in Our image, according to Our likeness; let them have dominion over the fish of the sea, over the birds of the air, and over the cattle, over all the earth and over every creeping thing that creeps on the earth” (Genesis 1:26).

“And the Lord God formed man of the dust of the ground, and breathed into his nostrils the breath of life; and man became a living soul”  (Genesis 2: 7).

But Adam and Eve rebelled against their Creator.  God told Adam that he could eat from any tree in the Garden except the tree of the knowledge of good and evil.

Even was deceived by Satan and she ate.  Adam sinned willfully and ate of that tree when Eve offered it.  Then suddenly Adam and Eve were aware of their nakedness.

The Garden had been paradise. Adam and Eve walked with God in that garden.

Now, cast out of the Garden, God’s creation of the man and woman entered a world of sin which had begun with them.

If God Created Adam and Eve, why did sin enter them?

Question: “If God knew that Adam and Eve would sin, why did He create them?”

Answer: The Bible says that God created all things—including us—for Himself. He is glorified in His creation. “From him and through him and for him are all things. To him be the glory forever! Amen” (Romans 11:36).

It may be hard to see how Adam and Eve’s falling into sin could bring glory to God. In fact, some might even wonder why, if God knew ahead of time all the trouble they would cause, He made them in the first place.

God is omniscient (Psalm 139:1–6), and He knows the future (Isaiah 46:10). So He definitely knew that Adam and Eve would sin. But He created them anyway and gave them a free will with which they chose to sin.

We must carefully note that Adam and Eve’s falling into sin does not mean that God is the author of sin or that He tempted them to sin (James 1:13). But the fall does serve the purpose of God’s overall plan for creation and mankind.

If we consider what some theologians call the “meta-narrative” (or overarching storyline) of Scripture, we see that biblical history can be roughly divided into three main sections: 1) paradise (Genesis 1—2); 2) paradise lost (Genesis 3—Revelation 20); and 3) paradise regained (Revelation 21—22). By far the largest part of the narrative is devoted to the transition from paradise lost to paradise regained. At the center of this meta-narrative is the cross, which was planned from the very beginning (Acts 2:23).

Reading Scripture carefully, we are led to the following conclusions:

1. The fall of mankind was foreknown by God.

2. The crucifixion of Christ, the atonement for God’s elect, was foreordained by God.

3. All people will one day glorify God (Psalm 86:9), and God purposes “to bring unity to all things in heaven and on earth under Christ” (Ephesians 1:10).

God’s purpose was to create a world in which His glory could be manifest in all its fullness. The glory of God is the overarching goal of creation. In fact, it is the overarching goal of everything He does. The universe was created to display God’s glory (Psalm 19:1), and the wrath of God is revealed against those who fail to glorify God (Romans 1:18–25). The world that best displays the glory of God is the world we have—a world that was allowed to fall, a world that was redeemed, a world that will be restored to its original perfection.

God’s wrath and God’s mercy display the riches of His glory, but we cannot see either without the fall of mankind. We would never know grace if we had never needed grace. Therefore, all of God’s plan—including the fall, election, redemption, and atonement of mankind—serves the purpose of glorifying God. When man fell into sin, God’s mercy was immediately displayed in God’s not killing him on the spot. God’s grace was immediately evident in the covering He provided for their shame (Genesis 3:21). God’s patience and forbearance were later on display as mankind fell deeper and deeper into sin. God’s justice and wrath were on display when He sent the flood, and God’s mercy and grace were again demonstrated when He saved Noah and his family. God’s holy wrath and perfect justice will be seen in the future when He deals with Satan once and for all (Revelation 20:7–10).

God’s glory is also revealed in His love (1 John 4:16). Our knowledge of God’s love comes from the Person and saving work of Jesus Christ in this fallen world. “This is how God showed his love among us: He sent his one and only Son into the world that we might live through him” (1 John 4:9). Had God decided not to create Adam and Eve, based on His knowledge of their fall—or had He made them automatons with no volition—we would never have truly known what love is.

The ultimate exhibition of God’s glory was at the cross where His wrath, justice, and mercy met. The righteous judgment of all sin was executed at the cross, and God’s grace was on display in His Son’s words, “Father, forgive them” (Luke 23:34). God’s love and grace are manifest in those whom He has saved (John 3:16; Ephesians 2:8–10). In the end, God will be glorified as His chosen people worship Him for all eternity with the angels, and the wicked will also glorify God as His righteousness results in the eternal punishment of unrepentant sinners (Philippians 2:11). Without the fall of Adam and Eve, we would never know God’s justice, grace, mercy, or love.

Some raise the objection that God’s foreknowledge and foreordination of the fall damages man’s freedom. In other words, if God created mankind with full knowledge of the impending fall into sin, how can man be responsible for his sin? The best answer to that question can be found in the Westminster Confession of Faith:

“God, from all eternity, did, by the most wise and holy counsel of his own will, freely, and unchangeably ordain whatsoever comes to pass; yet so, as thereby neither is God the author of sin, nor is violence offered to the will of the creatures; nor is the liberty or contingency of second causes taken away, but rather established” (WFC, III.1)

In other words, God ordains future events in such a way that our freedom and the working of secondary causes (e.g., laws of nature) are preserved. Theologians call this “concurrence.” God’s sovereign will flows concurrently with our free choices in such a way that our free choices always result in the carrying out of God’s will (by “free” we mean that our choices are not coerced by outside influences). It’s a complex interaction of wills and choices, but the Creator God can handle any amount of complexity.

God foresaw Adam and Eve’s fall. He created them anyway, in His own image, to bring glory to Himself. They were given freedom to make choices. Even though they chose to disobey, their choice became the means by which God’s ultimate will was carried out and by which His full glory will be seen. – source

Brethren, God foreknew the fall of Adam and Eve. God is all-knowing (omniscient) and He knows the history of mankind from the very beginning to the end. As it says in the gotquestions article, God foreknew:

The Creations of AI Robots

The scientists who are feverishly working on their AI creations can NOT see the future.  This in and of itself is very problematic.

I would assume that almost all (maybe all) of the robot building scientists are not believers. They are unregenerate sinners.  Their god is science, and they believe that we who worship God and trust Him in our lives are weak and gullible.

As they program their robots, they are uploading massive amounts of data into the “brains” of these machines. But let’s not forget that these same programmers are unrepentant sinners.  How can they not impart their biases and even their hatred of certain groups of people who do not share in their beliefs?

The scientists are working on the emotional side of data in order to make the AI bots more “human-like.”  As the saying goes “Garbage  in –  Garbage out. If a globalist is programming a bot, do you not think that the opinions placed in the AI machines will mirror those of their ‘creators’?

When God created Adam and Eve, it was the beginning of a story of which the Lord knew every detail.  It was His plan of the redemption of sinful men and women, and how many would be redeemed through the death, burial and resurrection of His Son, our Lord Jesus Christ.

Rebellion against God comes in many forms

Along with AI robots, there are other obvious forms of rebellion in our world today:

We could add many other endeavors of mankind to the above list.

Brethren, I am simply attempting to show the reader the dangers of AI and where these scientists are trying to take our world.  Even atheist Stephen Hawking (who died recently) warned about the frightening consequences of robots ultimately becoming a menace in our society.

We should be praying and watching.

That’s what watchmen do!