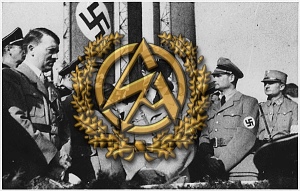 To a history buff, it is glaringly obvious that ANTIFA are the new Brownshirts who helped put Hitler into power. But the irony of it will most likely be the undoing of this international terror group when the powers that be are finished with them.

You will read in this article about the fate of the leaders of the Brownshirts, AKA Storm Troopers. Everyone was dispensable to Hitler and his Nazis. When they were finished with a group of people who obeyed Hitler’s violent commands, often times Hitler believed that these same people were capable of turning on him. So he slaughtered the leaders of these groups.

Believe it or not, the head of the Brownshirts was a well known homosexual named Ernst Röhm. It is a fact that homosexuals were slaughtered in the concentration camps. But this man was used for Hitler’s purposes before he was killed.

Read all about him HERE

After World War I, Germany’s economy suffered from depression and a devaluation of their currency.

​On January 30, 1933, Adolph Hitler was elected Chancellor of Germany by promising hope and universal healthcare.

Less than a month later, on February 27, 1933, a crisis occurred — the Rheichstag, Germany’s Capitol Building, was suspiciously set on fire, with evidence pointing to Hitler’s supporters.

​Hitler was quick to use this crisis as an opportunity to set aside Germany’s Weimar Republic and suspend basic rights.

Hitler overthrew the traditional leadership of Germany by using riots to destabilize the country.

Hitler had radical homosexual activist Ernst Röhm and his feared Brownshirts, also called Sturmabteilung (storm troopers), to storm into the meetings of his political opponents, disrupting and shouting down speakers.

They implemented boycotts of Jewish businesses, and in the Kristallnacht (Night of Broken Glass), they smashed windows of over 7,500 Jewish stores and 200 synagogues.

Once securely in power, Hitler had his SS and Gestapo secret police kill the Brownshirts in the Night of the Long Knives, thus eliminating competition and giving the public impression that he was cracking down on lawbreakers.

​He forced old German military leaders to retire by falsely accusing them.

​Some were imprisoned and even shot without a trial.

Hitler’s Minister of Propaganda, Joseph Goebbels, pioneered the use of fake news to sway the public opinion to accept the lies of the deep-state:

​“If you tell a lie big enough and keep repeating it, people will eventually come to believe it …

​”The truth is the greatest enemy of the state.”

In socialist countries, a person’s life is only of worth if it benefits the state:

​”No life still valuable to the state will be wantonly destroyed.” (German Penal Code, October 10, 1933)

​Those not promoting the deep-state narrative are driven from their jobs, publicly ridiculed, and eventually removed from society to labor and concentration camps.

National Socialist Workers Party operated over 1,200 concentration camps where millions of Jews, Poles, Gypsies, handicapped, and others were experimented upon, tortured, or were killed in gas chambers.

German churches were silent, as they had for centuries taught pietism – a version of separation of church and state where Christians were instructed to only focus on their own personal spiritual life and withdraw from involvement in worldly politics.

​As a result, the church stood by silent as the National Socialist Workers Party usurped power, leaving the stopping of Hitler to done by the sacrifice of millions of courageous Allied soldiers.

By the time a few courageous Germany church leaders spoke out, such as Dietrich Bonhoeffer, it was too late — the government had grown so powerful it simply arrested and executed them.

ANTIFA- the group which claims to be “anti-fascist” has literally become Nazi Fascists. Yet their propaganda has people believing a lie by saying the group is against Fascism.

“The best propaganda is that which, as it were, works invisibly, penetrates the whole of life without the public having any knowledge of the propagandistic initiative.”~ Joseph Goebbels, Hitler’s Propaganda Minister 1933

The word “Nazi” comes from The National Socialist German Workers’ Party (Nationalsozialistische Deutsche Arbeiterpartei). Socialist or Socialism is FAR LEFT. The truth is, Antifa has literally become the very thing they say they are protesting.

Hitler rose to power, not just because of his oratory ability, but because of his willingness to use violence against his opposition. In 1933, he used the burning of the Reichstag in Berlin to claim that Communists were trying to overthrow the government. It was an excuse to unleash a “wave of terror” across the nation.

He utilized the SA, eventually Hitler Youth and the SS, and finally the Gestapo to accomplish his plans until his death in 1945. Isn’t that what ANTIFA is doing? Fomenting violence to accomplish their goals?

The SA played a prominent role in the 1938 “Kristallnacht” in which violent “demonstrations” destroyed 200 synagogues, over 7,000 Jewish businesses, the desecration of Jewish cemeteries, Jews murdered… as well as over 30,000 men arrested and taken to Concentration Camps.

ANTIFA are socialist/Fascists, just like the Nazis. And just like the Nazis, they use totalitarian methods – using violence and intimidation to advance their agenda. Exactly the same as Hitler’s methods. But they are not confined to one place, they are international- InterNazis.

“Unlike the Storm Troopers of 1930s Germany, the Antifas are international, and represent an ideology that explicitly seeks the destruction of the nation-state and the abolition of national identity. Their mission is to deconstruct the nations of Europe so that Socialist Multiculturalism may be implemented with a minimum of resistance…” Gates of Vienna blog “The InterNazis“

With media in the pockets of the so-called “protesters,” we can expect the vicious nature of the opposition to grow.

“To attract people, to win over people to that which I have realised as being true, that is called propaganda. In the beginning there is the understanding, this understanding uses propaganda as a tool to find those men, that shall turn understanding into politics. Success is the important thing. Propaganda is not a matter for average minds, but rather a matter for practitioners. It is not supposed to be lovely or theoretically correct. I do not care if I give wonderful, aesthetically elegant speeches, or speak so that women cry. The point of a political speech is to persuade people of what we think right.” Joseph Goebbels

The narrative of the left that Conservatives and patriots are “nazis” is exactly how they plan to tear down the nation, and the problem appears to be escalating.

Are the protests “anti-Trump” or are they paid professionals who have joined a group whose purpose is to tear down America for good, using the momentum created by the left?

“You never let a serious crisis go to waste. And what I mean by that it’s an opportunity to do things you think you could not do before.” Rahm Emanuel

These are not normal nice people who call themselves Antifa. They are the very thing they tell us they hate. source

In Germany, Nazi leader Adolf Hitler orders a bloody purge of his own political party, assassinating hundreds of Nazis whom he believed had the potential to become political enemies in the future. The leadership of the Nazi Storm Troopers (SA), whose four million members had helped bring Hitler to power in the early 1930s, was especially targeted. Hitler feared that some of his followers had taken his early “National Socialism” propaganda too seriously and thus might compromise his plan to suppress workers’ rights in exchange for German industry making the country war-ready.

Brethren, I doubt if ANTIFA members would ever have a thought that George Soros or other financial backers of this heinous group could possibly turn on them when the job is done.

They think of themselves as noble warriors. They have believed the lie.  Just as one of the authors of an article  said so well:

“These are not normal nice people who call themselves Antifa. They are the very thing they tell us they hate”

I think that we should pray for these people. Only God knows if some of them could still be saved.

7 thoughts on “Hitler’s Brownshirts and ANTIFA: Similarities Are Astounding”