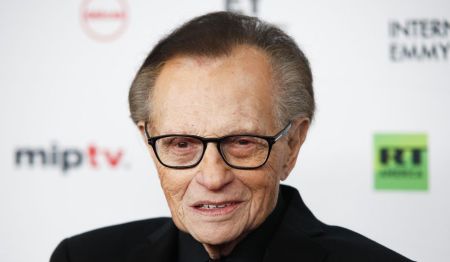 Most of America saw President Trump’s anger at Jim Acosta of CNN. I believe that our president had every right to be angry and to shut Acosta down. He called Acosta and CNN “Fake News.”  He nailed it.

Ever since 2016, the only topic covered at CNN is President Trump; and every story is published to attempt to bring him down.  It’s been one long tantrum!

ENOUGH!!  Get over it already!

The Washington Times did a piece on long-time CNN show host, Larry King and what he thinks about his former network.

Former longtime CNN host Larry King on Wednesday slammed his former network for focusing so much on President Trump’s every move that they neglect what he considers real news.

The now-RT America host lamented that CNN, where he hosted a prime-time show for 25 years, made Mr. Trump the story early on in his campaign and never got off the merry-go-round.

“There [were] vicious winds and storms in the Northeast the other day, not covered on any of the three cable networks. Not covered,” he said. “So when CNN started covering Trump — they were the first — they covered every speech he made and then they made Trump the story. So, Trump is the story in America.

“I guess it’s to their regret,” he added.

Mr. King’s comments come after CNN President Jeff Zucker recently celebrated the network’s most successful ratings year ever, admitting it was due in large part to their nonstop Trump coverage. – source

I wrote an article over a year ago about having to endure the “noise” coming from CNN all day long at a relative’s house.  It nearly drove me mad.  My relative believes everything she hears from CNN.  EVERYTHING!

It’s like  a sickness or a massive brain washing.

Brethren, pray for America. Antifa is a domestic terrorist organization funded by George Soros – and they are not being arrested!  They terrified the family of Fox News commentator, Tucker Carlson when he was not home.  They have threatened him and his family.

This is AMERICA!   To me, it is unrecognizable at times.

12 thoughts on “Larry King Slams His Own Network: ‘CNN Stopped Doing the News A Long Time Ago’”