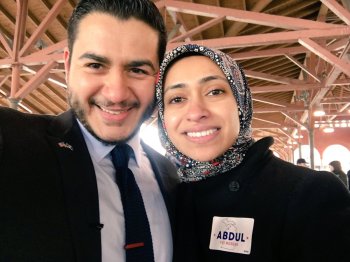 I want the readers to understand that this article was written before el-Sayed ran for the gubernatorial race in Michigan.  He ultimately lost. But that does not mean that Soros has written him off.

Do you remember the keynote speaker at the DNC in 2004? If you don’t, let me tell you about him.  He came onto the stage after years of being groomed by George Soros. He was picked by the Left to be their “champion” of Hope and Change.  I guess that gave it away.

The keynote speaker at the DNC that year was Barack Hussein Obama. Even my sons, who had never been interested in politics, were mesmerised by this man. His speech launched him as the darling of the Dems, and he would go on to serve as president of the U.S. for 8 years.

And he would nearly destroy our country.

This was not from incompetence – it was a deliberate attempt to destroy us, born out of hatred for America and Capitalism.  President Trump is attempting to clean up the massive mess left to him by Obama.

There is a new potential “darling” of the Left. He is an accomplished doctor with a “Soros” Fellowship.  I knew that Soros had to be in the picture somewhere with Dr. el-Sayed.

A couple of years ago I wrote an article on “Star Spangled Sharia” – the new political party that the Islamists were going to launch.  I think that they now see  that it’s much more cost effective to just have their man run as a Democrat. I mean, that IS the party which hates America and wants to see her destruction, right?

El-Sayed is supported by Muslim Brotherhood and all of their terrorist affiliates. I’m sure that the Left is hoping that President Trump will be a one termer. Dr. el-Sayed lost the primary election for Governor of MI,  but don’t discount him yet.   Dearborn, MI has been referred to as “Dearbornistan” for many years now. This city has no-go zones for the police.  And if you would visit Dearborn, you might think that you were in an Arabic country.  His loss in the primary election may be calculated.

Perhaps the Left will bring him out as a keynote speaker at the next DNC. Remember how that launched the infamous career of Barack Obama!

You see, Muslims do not assimilate – they move in and dominate. That is referred to as “Political Jihad.”

What we see happening in the U.K. and in London particularly – THAT is coming here to America.  Not only did Abdul el-Sayed run for the gubernatorial primariy  in MI, but there are over 110 Muslims running for Congressional seats in the 2018 mid terms.  And I believe that many of them will get into office.

Our Constitution May be Replaced

Brethren, any  Conservative who is not concerned about this has his/her head buried so deep in the sand.  Our very foundation – the Constitution of the United States is in jeopardy of being replaced by Sharia law.  Yes – you read that right.

Political Jihad is the Islamist’s choice over physical terrorism. It’s cleaner and with the Leftwing liberal nuts and their herd mentality – these Islamists just might sweep across America in 2018.  And don’t be surprised if Dr. Abdul el-Sayed runs against Donald Trump in 2020.  It might be too early for him, but who knows?

I’ve said in many of my articles that Sharia law just may be what God uses to punish America and bring about her destruction.  Some are thinking “Why would God punish America?”  Go read the story of Sodom and Gomorrah to get a picture of what is happening in this country.

Many who call themselves Christians in the mainline churches have aligned themselves with the Democrats. This is being accomplished by the new Social Justice gospel. And there are many false teachers and cults out there who look like Christians to the world, but we know the truth.

From wnd.com  (written before the 2018 Primaries)

The Democratic Party may have found its next Barack Obama.

His name is Dr. Abdul el-Sayed, he’s a 32-year-old medical doctor and he recently launched his campaign for governor of Michigan, the election for which is in November 2018. If he wins he would be America’s first Muslim governor.

He speaks articulately, without an accent, inserts humor into his speeches at seemingly just the right moments, and he has the full backing of America’s powerful Muslim Brotherhood-linked network of Islamic organizations.

In an interview with Al Jazeera, El-Sayed said Michigan voters are having “buyer’s remorse,” and that President Trump’s decisions “are at odds with deeply held American values, and distractions from real issues.”

Sayed served as the executive director of the Detroit Health Department and Health Officer for the City of Detroit, appointed by Mayor Mike Duggan. At 30 years old, he was at the time of his appointment in 2015 the youngest health director in a major U.S. city.

According to El-Sayed, his decision to run for governor was influenced by concerns over state leadership following the lead-tainted water crisis in Flint, as well as policies being implemented in Washington, D.C., under President Trump.

Dick Manasseri, spokesman for Secure Michigan, a group that educates Michiganders about the threat of Shariah law, predicts that Sayed will at least win the Democratic nomination for governor.

America is headed down a suicidal path – but it’s a subtle invasion. Get all the details in the brand-new book “Stealth Invasion: Muslim Conquest Through Immigration and Resettlement Jihad,” available now at the WND Superstore.

“It is the exact same thing as Barack Obama in Chicago in the early 2000s,” said Manasseri. “He’s young, attractive, he does not give out a lot of information, he speaks in platitudes about celebrating inclusiveness and diversity.”

Sayed is known as a warrior for environmental justice. He talks about “standing up to corporate polluters,” and how, in his family, he was taught that having “love and compassion” for the vulnerable are “more important than where you’re from.”

“How could any good progressive Democrat vote against that in good conscience?” asks Manasseri.

Sayed is highly educated, a Rhodes scholar who attended Oxford University in 2009 and became a practicing epidemiologist.

“He’s very well packaged,” Manasseri said. “He’s far more accomplished than Barack Obama. Obama was not this accomplished, they connected him to certain foundations and his candidacy took off.”

Sayed is the recipient of several research awards, including being named one of the Carnegie Council’s Policy Innovators. He created and taught the Mailman School’s first-ever course on systems science and population health. He co-edited a textbook on the topic published in 2017 by Oxford University Press entitled “Systems Science and Population Health.”

In his new video ad Sayed says that as Detroit’s health director one of the first big things he did was come up with a government program to purchase eyeglasses for every kid that needed a pair. “Why? Because every child deserves the right to see what’s on the blackboard,” he said in his campaign launch speech.

He pointed to his hand as the map of Michigan [a very folksy thing to do] to locate Gratiot County, “in the heartland of Michigan,” the place where he was born to Egyptian-immigrant parents and raised by his dad, Muhammad, and his stepmother Jacqueline, a native Michigander.

In his campaign launch on Feb. 25 at Detroit’s Eastern Market, Sayed talked about his dad growing up one of six kids in a one-bedroom apartment in Egypt and coming to America and bringing his diversity of culture to Michigan. It’s all about celebrating multiculturalism, he said, standing at a podium in the market amid supporters holding signs that read “Abdul for Michigan.”

“He would come to this market to buy the foods to make the dishes that would make him feel at home. You see this market for him brought him home, from Alexandria right here in Detroit. Some of my most wholesome memories took place right here,” Sayed said. “And I remember buying those foods… but not only that I remember the diversity of faces that I would experience here, black and white, Asian, Latino. People who are coming together to celebrate something, together. Farmers and truckers and factory workers. Families from up north doing business with families from right here in Detroit. Each of them Buying and selling the same exact ingredients that they would take home to turn into the dishes that celebrated their families’ history.”

Sayed promotes what he calls his “rather unusual American story.”

He said his proud Egyptian parents, Fattah and Muhammad, emigrated to the U.S. “in search of a better life.” Muhammad came originally on a student visa to attend Wayne State University. –source

Even though ed-Sayed is a devout Muslim, he is “progressive” in his politics. He is pro-LGBTQ – pro abortion – pro-transgender movement.  So, you might ask how he can reconcile his views with his religion.  That is an excellent question!

It’s called taqiyya which is permissible lying to further the cause of Islam. This is straight out of the Hadith – a holy book of Islam.

Sounds like Mr. Sayed could write his own version of Obama’s “Dreams from My Father.”  And it sounds like Soros has this man well groomed to run. 2020 may be too soon, but I think that ed-Sayed being the Democratic pick for a presidential run is inevitable.

Brethren, hopefully we will not be here to witness this, but who knows? We know that America does not show up in End Times Prophecy.  Could it be that this once great country, founded upon Judeo/Christian values, will be overtaken by Islamists?

I think there is a very good chance that this will happen to us.

Keep looking up, brethren. We know not when Jesus will come for us. Let’s hope and pray that it is very soon.

We will never be separated from Him again!

A Sermon For Sunday

27 thoughts on “The Next Obama: Don’t Say You Were Not Warned”