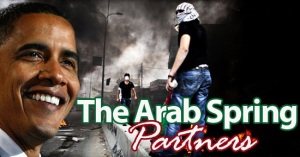 I am posting this article to help people around the world to see that Barack Obama was the architect and orchestrater of the Arab Spring:

“The Obama Administration’s support of the Muslim Brotherhood revolutionaries in the Middle East, beginning with deposing Mubarak in Egypt then spreading destabilization to Tunisia, Libya and Syria, ignited an out-of-control fire that has consumed practically all of North Africa and the Middle East. The inferno still rages and is imposing irreversible consequences on the West.

The Obama Administration backed revolutionaries who were bent on imposing Sharia law and eradicating what were twistedly deemed enemies of Allah. There were no moderate revolutionaries in the Middle East, and yet, Obama and Clinton were determined to ignite chaos, perhaps believing that somewhere down the “Yellow Brick Road” in their dreams would be found some moderates. The obvious in front of them seemed invisible. The instability fashioned by Obama decimated Christianity’s presence in all Muslim nations across the top of the African continent. Clinton admitted to providing, “training and guidance to the Muslim Brotherhood.”

As with every other major action it has taken, this Administration imposed its anti-West agenda, against all common sense, wisdom, insight or reason. Obama and Clinton overthrew Gadhafi opposing all warnings from their own military leadership. Gadhafi was battling Islamic fundamentalist rebels, and yet Clinton decided to support them. Obama and Clinton had decided on regime change. Clinton lied to America with claims that Gadhafi was planning mass killings of demonstrators — so off she went, supporting Jihadists. No wonder she destroyed her email server. It is also not surprising that she was able to solicit support from Kerry and McCain for her egregious assertions.

Responsibility for this massively consequential fraud lays at the hands of Obama, Jarrett, Clinton, Kerry, Rice, Power, among others. This level of stupidity was profound, and yet, it still continues to self-righteously hold the reigns of power. Under Obama’s and Clinton’s watch, the anarchy, chaos and genocide spread, infecting the whole of the Middle East.

Across the top of the African continent Obama and Clinton ensured that their plans for destabilization would wash across Libya, Tunisia and Algeria. With the exception of Morocco, the sabotage was complete. The result?

June 7, 2014 – Mediterranean Sea / Italy: Italian navy rescues asylum seekers traveling by boat off the coast of Africa. More than 2,000 migrants jammed in 25 boats arrived in Italy June 12, ending an international operation to rescue asylum seekers traveling from Libya. They were taken to three Italian ports and likely to be transferred to refugee centers inland. Hundreds of women and dozens of babies, were rescued by the frigate FREMM Bergamini as part of the Italian navy’s “Mare Nostrum” operation, launched last year after two boats sank and more than 400 drowned. Favorable weather is encouraging thousands of migrants from Syria, Eritrea and other sub-Saharan countries to arrive on the Italian coast in the coming days. Cost of passage is in the 2,500 Euros range for Africans and 3,500 for Middle Easterners, per person. Over 50,000 migrants have landed Italy in 2014. Many thousands are in Libya waiting to make the crossing. (Massimo Sestini/Polaris)

The formerly stable governments of these nations across North Africa, as distasteful as they were, — Algeria, Tunisia and Libya, had long established and protected borders. Their disintegration has been like a release valve blowing wide open to the pressures of the African continent. These nations had in effect created a barrier between Europe and hundreds of millions of people in Somalia, Ethiopia, Sudan, Chad, Niger, Mali, Zaire, Kenya, etc., who had known little but strife and starvation from long histories of tribal conflict and abusive dictators. Obama and Clinton blew the top off the continent. As to the slaughter of Ambassador Stevens in September of 2012, “what difference at this point does it make?”

Today, ISIS is conducting beheadings on the beaches of Libya, and human traffickers are doing a booming business trucking people north out of Africa and to the shores of the Mediterranean. From there they overload anything capable of floating them to Europe. Many who start out, do not survive the ride through long stretches of desert, and fewer still make it over the waves of the Mediterranean and to the beaches of Italy or Greece or France or Spain. Millions are nevertheless anxious to attempt the voyage.

The attraction of perceived stability and the social breadbaskets of Europe is a siren song that is calling to millions who are willing to risk their lives, coming across and through the now unstable North African countries.

Intended or not, malicious or not, the Obama and Clinton decisions are now responsible for the daily loss of thousands of lives. Obama’s Arab Spring has transformed into an enforced “wealth redistribution” for Europe.

The world is disintegrating rapidly. America’s leadership? Other than giving “aid and comfort” to America’s enemies such as those in Teheran or in Havana, it is Out Golfing.” [1]

America is under siege by this Muslim tyrant!

Most people who know me know I am a Jewish Christian. When I think of myself, I am Christian. I am a follower of Christ. The fact that I was born a Jew remains until my final breath; I did not cross over some line to become a Christian while leaving my Jewishness behind. It’s quite impossible to do that. I am a Christian who also happens to be an ethnic Jew.

I met another Christian Jewish woman years ago. She attended a Messianic congregation and was shocked and appalled that I did not. I told her that I’ve never felt the Lord urging me to do that. I find it clannish. I don’t want to only worship with other Messianic Jews. I want to worship with the Body of Christ. This woman was not happy with my reasoning, but I felt a conviction about my decision. I did not…