Do you know why?  It really is quite simple.  Islam teaches them that when they go to another country, their goal is to take over that country, and to implement sharia law.

I have said before that when my people came to America from Ukraine, they were so excited at the thought of becoming Americans.  They couldn’t wait to learn English and study about America’s history and her Constitution.  They were in the best country on the planet, and they knew it.

They came through Ellis Island, NY and were so thrilled when they saw the Statue of Liberty.

Not so with Muslims. They create there own territories which become what is known as “No-go Zones.”  In NYC they even have their own police force and squad cars for these areas.

And my family never referred to themselves as Jewish Americans or Ukrainian Americans.  We were AMERICANS and we were proud to be!

The Council on American Islamic Relations (CAIR) recently held its 25th Annual Gala in Washington, D.C, in which CAIR’s executive director announced a goal of pushing more Islamists into Congress.

“A strong CAIR equals a strong community. A strong community will produce a strong and confident and successful Muslim … “So I’m telling you tonight we are going to work in the next years, inshallah (God willing], to elect at least 30 Muslims in the Congress. This number is equivalent to our size and our potential as American Muslims. Including at least two U.S. senator Muslims.”

In 2008, I heard this message echoed at a southern California mosque by Imam Siraj Wahhaj at an event sponsored by the Muslim Alliance in North America (MANA), where Wahhaj said:
“There is no America. There is only Islam.”

None of these views have been clandestine. Over the years the message has been consistent. What has changed is that the Islamist candidates they produce are more vocal about exactly which interests they represent.

Congresswoman Ilhan Omar’s support of the Hamas terror group and the anti-Semitic BDS movement against Israel is the most recent demonstration of that.
Originally published at Clarion Project – reposted with permission. source

I hope and pray that President Trump understands how Muslims operate. It’s hard to believe that not one of his advisors educated him on the ways of Islam. 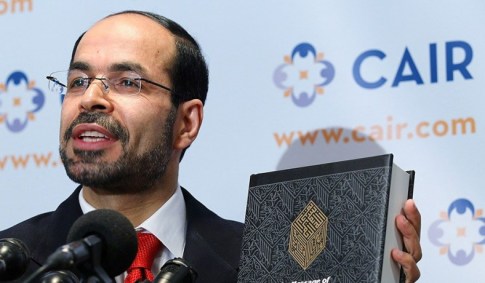 Is CAIR a Terrorist Group?

A prominent Arab government thinks so.

We who follow the Islamist movement fell off our collective chair on November 15, when the news came that the United Arab Emirates’ministerial cabinet had listed the Council on American-Islamic Relations (CAIR) as one of 83 proscribed terrorist organizations, up there with the Taliban, al-Qaeda, and ISIS.

This came as a surprise because the UAE authorities themselves have a record of promoting Islamism; because CAIR has a history of raising funds in the UAE; and because the UAE embassy in Washington had previously praised CAIR.

On reflection, however, the listing makes sense for, in recent years, the Islamist movement has gravely fractured. Sunnis fight Shiites; advocates of violence struggle against those working within the system; modernizers do battle against those trying to return to the seventh century; and monarchists confront republicans.

This last divide concerns us here. After decades of working closely with the Muslim Brotherhood (MB) and its related institutions, the Persian Gulf monarchies (with the single, striking exception of Qatar) have come to see the MB complex of institutions as a threat to their existence. The Saudi, Emirati, Kuwaiti, and Bahraini rulers now view politicians like Mohamed Morsi of Egypt as their enemies, as they do Hamas and its progeny — including CAIR.

While the Gulf monarchs have not become any less Islamist, they have acquired a clear-eyed appreciation of the harm that MB-related groups can do.

Having explained why the UAE listed CAIR on its terror manifest, we must ask a second question: Is the listing warranted? Can a Washington-based organization with ties to the Obama White House, the U.S. Congress, leading media outlets, and prestigious universities truly be an instigator of terrorism?

CAIR can rightly be so characterized. True, it does not set off bombs, but, as the UAE’s foreign minister explains, “Our threshold is quite low. . . . We cannot accept incitement or funding.” Indeed, CAIR incites, funds, and does much more vis-à-visterrorism:

It apologizes for terrorist groups: Challenged repeatedly to denounce Hamas and Hezbollah as terrorist groups, CAIR denounces the acts of violence but not their sponsors.

It is connected to Hamas: Hamas, designated a terrorist organization by the U.S. and many other governments, indirectly created CAIR and the two groups remain tight. Examples: In 1994, CAIR head Nihad Awad publicly declared his support for Hamas; the Holy Land Foundation (HLF), a Hamas front group, contributed $5,000 to CAIR; in turn, CAIR exploited the 9/11 attacks to raise money for HLF; and, this past August, demonstrators at a CAIR-sponsored rally in Floridaproclaimed “We are Hamas!”

It settled a lawsuit: CAIR initiated a libel lawsuit in 2004 over five statements by a group called Anti-CAIR. But two years later, CAIR settled the suit with prejudice (meaning that it cannot be reopened), implicitly acknowledging the accuracy of Anti-CAIR’s assertions, which included:

It includes individuals accused of terrorism: At least seven board members or staffat CAIR have been arrested, denied entry to the U.S., or were indicted on or pled guilty to (or were convicted of) terrorist charges: Siraj Wahhaj, Bassem Khafagi, Randall (“Ismail”) Royer, Ghassan Elashi, Rabih Haddad, Muthanna Al-Hanooti, and Nabil Sadoun.

It is in trouble with the law: Federal prosecutors in 2007 named CAIR (along with two other Islamic organizations) as “unindicted co-conspirators and/or joint venturers” in a criminal conspiracy to support Hamas financially. In 2008, the FBI ended contacts with CAIR because of concern about its continuing terrorist ties.

On learning of the UAE listing, CAIR called it “shocking and bizarre,” then got to work to have the Department of State protest and undo the ruling. Nothing loath, department spokesperson Jeff Rathke noted that the U.S. government, which “does not consider these organizations to be terrorist organizations,” has asked for more information about the UAE decision. The UAE minister of state for foreign affairs replied that if organizations can show that their “approach has changed,” they are eligible to appeal “to have their names eliminated from the list.”

Pressure from the Obama administration might reverse the UAE listing. Even so, this will not undo its lasting damage. For the first time, an Islamist government has exposed the malign, terroristic quality of CAIR — a stigma CAIR can never escape.

— Daniel Pipes is president of the Middle East Forum. © 2014 by Daniel Pipes. All rights reserved. source

It’s becoming crystal clear that the Lord is using Islam in bringing about many end times prophecies.  I would never have imagined that the inevitable demise of America might come at the hands of Radical Islam.

And even stranger, that Islamists would find a friend in the Left and work together to unravel our once great country.