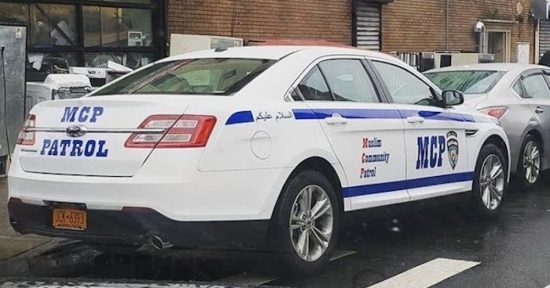 I wrote this article last year. It dawned on me that with the current defunding of certain police departments in the U.S., that perhaps this could be the future of Police Forces across the U.S.

And in light of the fact that the Muslim Brotherhood, CAIR and Hamas are backing Black Lives Matter, and calling it their own – this article must be read by all of us who love America and want our Constitution to be honored.

If you do the math, it is alarming.

While American women are fighting for their right to kill their unborn children right up to the day of delivery;  Muslims DO NOT abort their children. Also, Muslim men are permitted to have more than one wife.  So, add that to the math to truly get a picture of the changing demographics in America.

Now, the NYC Muslims have formed their own patrol units.  Although the NYPD claims that these Muslims are not sanctioned in NYC, they are allowed to patrol the streets, and these vehicles look extremely official.

We all remember where we were when the Towers in NYC came down.  Being an older person, I remember vividly the day that JFK was assassinated.  9/11 is engrained in my memory much the same way.

One would think that 9/11 would have been a major wakeup call for Americans. Sadly, the opposite effect has happened in our country.  The Muslims and Leftist news sites twisted the horrific event to plead that Muslims needed protecting from “angry” Americans.

But as Christians, we must remember:

“For we do not wrestle against flesh and blood, but against principalities, against powers, against the rulers of the darkness of this age, against spiritual hosts of wickedness in the heavenly places”  (Ephesians 6:12).

NYPD on Muslim Community Patrol: “This Group Is Not Officially Sanctioned By The NYPD, They’re Subject To The Law”

This statement from NYPD Sergeant Jessica McRorie is interesting: “This is not an NYPD vehicle. The NYPD did not outfit or label this vehicle. This group is not officially sanctioned by the NYPD and they are subject to the law.”

If the Muslim Community Patrol is not officially sanctioned by the NYPD, isn’t it subject to laws regarding impersonating a police officer? But would anyone dare risk charges of “Islamophobia” in Bill de Blasio’s New York by pursuing such an inquiry? Not on your life.

In late December 2018, New York residents spotted a white and blue “Muslim Community Patrol” (MCP) vehicle that looks like an official NYPD vehicle. Yet in a statement to PJ Media on Wednesday, the NYPD disavowed any link to the Muslim Community Patrol. Any attempts to enforce Sharia (Islamic law) would not be sanctioned by the police.

“This is not an NYPD vehicle,” Sergeant Jessica McRorie told PJ Media. “The NYPD did not outfit or label this vehicle. This group is not officially sanctioned by the NYPD and they are subject to the law.”

The Post found the patrol car — a white Ford Taurus with the MCP insignia nearly identical to those of an NYPD patrol car with the words “Muslim Community Patrol” where an official police vehicle would read “Courtesy Professionalism Respect” — cruising on Fifth Avenue in Brooklyn’s Bay Ridge, a local community with a growing Muslim population….

When the Brooklyn Asian Safety Patrol (BASP) launched in 2014, it had close ties to the police department. “They are our eyes and ears,” NYPD Deputy Inspector James Grant, who helped start the program, told the Post in 2014. The group received civilian-observation-patrol training from the NYPD, as well as support from the volunteer Jewish watch group Shomrim.

The BASP launched with a team of 15 Asian-American residents, walkie-talkies, uniforms, and two NYPD-style patrol cars. Its members — like those of Shomrim — do not have the authority to stop and detain people, but they call 911 if they witness a crime or spot someone acting suspiciously. NYPD officers will then come and stop, question, and frisk people if warranted….

The BASP uses cars with an official NYPD logo, unlike the Muslim Community Patrol cars.

Given this background, the NYPD’s full-throated insistence that there is no link between the Big Apple’s police and the MCP suggests that the Islamic group does not enjoy the same status and training as Shomrim or BASP….source

Brethren,  there are more types of “Jihad” than violence.  There is political Jihad (we are seeing this in our Congress) and what we are seeing right now is called “Cultural or Population Jihad.”  And coupled with the alarming rate of abortion among women in the West – it is truly a no brainer to see this population war will not bode well for America.

Pray and share the Gospel of Jesus Christ.  This is what we are called to do!