This is a reprint of original article with a very important update at the end of the article. 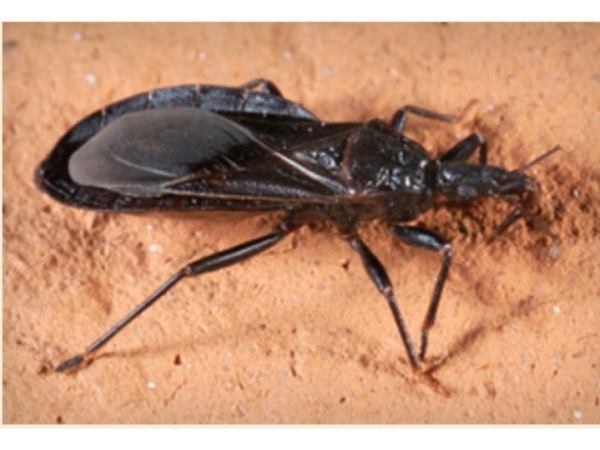 Many of us have been wondering about diseases brought into the U.S. by illegal immigrants.  Little did we know that deadly bugs never seen in our country have now invaded half of our States.  These bugs come from Mexico, Central America and South America.

The bug goes by various names.  One of these names has a rather endearing sound to it:  the Kissing Bug.  But don’t be fooled. When you see why it was named this, you will be alarmed.

The Kissing Bug name came about because when these insects enter your home, they wait till the middle of the night and bite around the mouth area and also around the eyes.

Here is a map of States where the Assassin bug has been spotted: 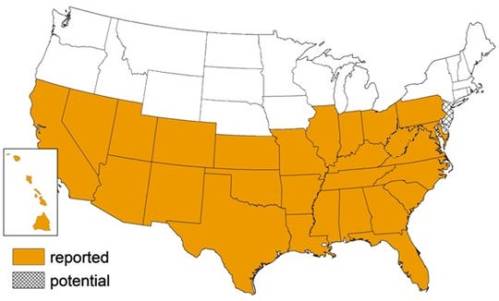 Picture of Kissing or “Assassin” Bug from the Internet. This bug was found in Maryland where we live: 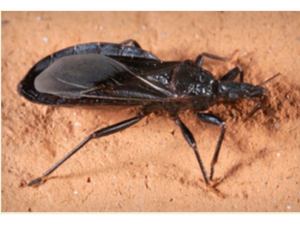 Kissing Bug found on the screen of our porch: 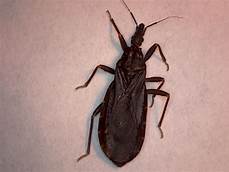 Chagas, a parasitic disease, is the latest invisible killer infection to be recognized as a growing threat here. The infection is transmitted by the Triatomine bug, known as the “kissing” bug. The bugs infect people through bites—often near the eyes or mouth—or when their infected feces are accidentally rubbed into eyes or mucous membranes. Some transmission occurs from mother to child during pregnancy. Occasionally, transmission is through contaminated food or drink.

Most people in the U.S. with Chagas disease probably became infected as children, living in Latin America. The infection often has few symptoms early on, but after several decades, strikes fatally, often with sudden death from heart disease. I suspect that, similar to Lyme disease, the magnitude of disease and deaths from the protozoan parasite, Trypanosoma cruzi, which causes Chagas disease, is unrecognized in the U.S.

In Latin America, however, up to 12 million people might be infected, with a third going on to develop life-threatening heart complications. Chagas is a major cause of congestive heart failure and cardiac deaths, with an estimated 11,000 people dying annually, according to the WHO.

There are an estimated 300,167 people with Trypanosoma cruzi infection the U.S., including 40,000 pregnant women in North America. There are 30,000-45,000 cardiomyopathy cases and 63-315 congenital infections each year. Most of the people come from Mexico, El Salvador, Guatemala, Honduras, or Argentina; Bolivia has the highest rate of Chagas in the world.

But in the U.S., we don’t often think of Chagas. Even as an infectious disease physician, I’ve never treated anyone with it, and it is not on my radar. So when a physician sees a patient who may have come to the U.S. as a child, and now has diabetes and hypertension, he or she is likely to attribute the heart disease to that and not look for infection. In fact, though, there are large pockets of undiagnosed disease. For example, a survey in Los Angeles of patients with a new diagnosis of cardiomyopathy who had lived in Latin America for at least a year, found 19% had Chagas disease, and they had a worse prognosis than those without the infection.

There are other reasons Chagas is overlooked. One is that Chagas is not a reportable disease except in four states, and Texas only began reporting in 2010. Most cases here have been detected by screening of blood donations, which has found about 1 in every 27,500 donors to be infected, according to CDC. However, a 2014 survey showed “one in every 6,500 blood donors tested positive for exposure to the parasite that causes Chagas disease.” A map of positive donations is here. While the triatome bugs are most common in the southern half of the U.S., they are actually quite widespread, as shown here.

Much bigger barriers to diagnosis are social and cultural. Many patients lack health insurance. Others are undocumented immigrants fearing deportation. Health literacy and language barriers are huge. There is a stigma associated with the diagnosis, as there is for many patients with TB, as Chagas is associated with poverty and poor living conditions. As Daisy Hernández noted in her excellent story in the Atlantic, “it’s hard, if not impossible, for moms with Chagas and no health insurance to see the doctors who would connect them to the CDC” and “patients don’t necessarily have savings in case they have adverse reactions to the medication and can’t work.”

There are pockets of Chagas in the states, including Los Angeles, the Washington metropolitan area, and the Texas border, where there are large immigrant communities from endemic areas. But I suspect that with climate change, we’ll see more Chagas in the southwest U.S., as more triatomine bugs are found further north. One recent study found more than 60% of the collected bugs carried the Trypanosome parasite, up from 40-50% in two similar studies. There are also now seven reports of Chagas infection that are clearly autochthonous, or locally acquired. University of Pennsylvaniaresearcher Michael Levy has shown that bedbugs might be capable of transmitting Chagas, but no one has shown that they actually do. Entomologist and Wired author Gwen Pearson nicely explains why bedbugs are an unlikely vector and notes that you “far more likely to be injured by misusing pesticides to try to exterminate” them.

There’s more bad news. Treatment for Chagas is effective if given early in infection, although with significant side effects. There is no effective treatment for late stages of gastrointestinal or cardiac disease. A newly released study showed that benznidazole was no more effective than placebo in reducing cardiac complications, even though it reduced levels of parasites in the blood.

The two drugs available to treat Chagas, benznidazole and nifurtimox, are not yet FDA approved and are only available through the CDC under investigational protocols. Both carry significant side effects. Treatment of children with early Chagas is generally effective but, as with many drugs, treatment is hampered by lack of data on pediatric dosing and limited formulations. There is little research funding for new drug development, with less than US $1 million (0.04% of R&D funding dedicated to neglected diseases) focused on new drugs for Chagas disease, according to the Drugs for Neglected Diseases Initiative (DNDi).

Where do we go from here? The most immediate and cost-effective proposals are to increase surveillance for disease and screening of high-risk populations. Since the most effective treatment is given early in the course of infection, screening of pregnant women and children is a priority, as is education for these women and Ob-Gyn physicians.

While there is no effective treatment for advanced disease, efforts are underway to develop a vaccine against Chagas. The National School of Tropical Medicine at Baylor College of Medicine just received a boost from a $2.6 million grant from the Carlos Slim Foundation for their initiative. source

This bug and Chagas disease is affecting our pets as well.

Here are links from this pet website.  These links contain very important information for pet owners about this bug and Chagas disease. We can contract Chagas from affected pets!    Please share this with others.

This morning, one of our dogs was chasing a bug and then ate it before I could get to him.  Although I am not certain that it was one of these deadly bugs; because I found one on our porch just days ago (photo above) I called our vet. Our vet said to bring Buddy over immediately because this bug can cause severe neurological symptoms in dogs.

Our dog was frantic in wanting to go out into our yard, so my husband took him out. He ate grass as if he was a cow and then vomited. The vet looked Buddy over and basically said it’s a wait and see at this point.

Brethren, although I do feel compassion for those in various other countries who have contracted Chagas disease;  I cannot express the anger I feel because the Leftists in our Congress care not for the American people and have refused to build a wall along our border.  The wall may not have protected us from any of these bugs or people carrying “Chagas” but I believe that it would have made a huge difference in slowing this down in our country.

Now, we’re infested.  There is no known cure for Chagas. It can be fatal. It causes congestive heart failure and heart attacks.

My Bizarre Discussion with a Top Editor of the Washington Times

To say that I was shocked would still be an understatement. When I got this gentleman on the phone, I began to tell him that I was a freelance writer, presently doing research on the Kissing bug which had been spotted in the Balt/Wash area. I told him that most of these insects carried Chagas disease which could be fatal.  When I told him that America had never had to battle this very dangerous insect in the past; and that they came from Mexico, Central and South America – the editor was enraged!

He said to me “Are you trying to say that we have these bugs because of immigrants coming into America?!  Do you think that they boxed many of them up and imported them maliciously?”

In my state of shock, I found myself almost speechless. But again the editor broke in and said to me “NO – this is certainly NOT something the Washington Times would consider covering!”

Then he hung up. I was so confused. One would have thought that I had called the Washington Post. I would have expected that response from them – but certainly not the Times, which is the most Conservative news source in our area.

That experience has stayed with me.  I can’t help but wonder if the Washington Times may, in the near future, lean left. This would be disturbing to many of us who have come to love the Times for their Conservative viewpoints.

But nothing surprises me anymore.

God help us all.