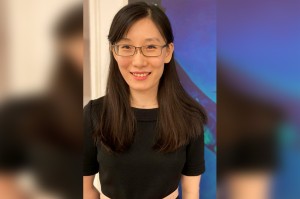 I think that most of us knew this was the truth. Something was just not right. The stories which broke kept pointing to the fact that the Covid-19 virus was man-made in the Wuhan lab.

And now a virologist from China has become a whistle blower and has defected to America to tell all she knows. It was clear in her interviews that she would have been murdered if she remained in China.

That a how Communist countries deal with whistle blowers.

A Chinese virologist who has reportedly been in hiding for fear of her safety has stepped out into the public eye again to make the explosive claim that she has the scientific evidence to prove COVID-19 was man-made in a lab in China.

Dr. Li-Meng Yan, a scientist who says she did some of the earliest research into COVID-19 last year, made the comments Friday during an interview on British talk show “Loose Women.”

When asked where the deadly virus that has killed more than 900,000 around the globe comes from, Yan — speaking via video chat from a secret location — replied, “It comes from the lab — the lab in Wuhan and the lab is controlled by China’s government.”

She insisted that widespread reports that the virus originated last year from a wet market in Wuhan, China, are “a smokescreen.”

“The first thing is the [meat] market in Wuhan … is a smokescreen and this virus is not from nature,” Yan claimed, explaining that she got “her intelligence from the CDC in China, from the local doctors.”

The virologist has previously accused Beijing of lying about when it learned of the killer bug and engaging in an extensive cover-up of her work.

She had said that her former supervisors at the Hong Kong School of Public Health, a reference laboratory for the World Health Organization, silenced her when she sounded the alarm about human-to-human transmission in December last year.

In April, Yan reportedly fled Hong Kong and escaped to America to raise awareness about the pandemic.

Now, she said she is planning to release scientific evidence to prove that the virus was made inside a lab in Wuhan.

“The genome sequence is like a human finger print,” she told the talk show. “So based on this you can identify these things. I use the evidence … to tell people why this has come from the lab in China, why they are the only ones who made it.”

Yan added, “Anyone, even if you have no biology knowledge, you can read it, and you can check and identify and verify by yourself.”

“This is the critical thing for us to know the origin of the virus,” she said. “If not we cannot overcome it — it will be life-threatening for everyone.”

She said she is coming out now because “I know if I don’t tell the truth to the world, I will be regretful.”

Yan also claimed that before fleeing China, her information was wiped from government databases.

“They deleted all my information,” she told “Loose Women,” claiming that people have been recruited “to spread rumors about me, that I’m a liar.”

Yuan Zhiming, the director of the Wuhan Institute of Virology, has previously denied reports that the bug accidentally spread from his facility.

“There’s no way this virus came from us,” Zhiming told state media in April. source

But brethren, let’s not forget about Dr. Anthony Fauci’s part in this insane “bioweapon” saga which has closed down the economies of the entire world.

Let’s go back to a piece I wrote about Fauci and how he sent over $7.4 million to the Wuhan Institute of Virology when a moratorium had been called in the U.S. for  the risky experiments on the viruses.

In my opinion, if these accusations by the Chinese whistle blower turn out to be accurate, then I believe that Fauci should appear before Congress to determine if he should be tried in court for his part in this evil criminal plan.

From  My WordPress Site

In my research of Dr. Fauci, who heads the National Institute of  Allergies and Infectious Diseases, it has become evident to me that he has a long record of making risky and irresponsible decisions about virus research.

In a prior article I quoted the dollar amount paid to the Wuhan Lab by NIH as $3.7 million.  It has now been revealed that the true funding amounted to $7.4 million.

There is a term which I have been seeing frequently during this global nightmare – GOFR which means “Gain of Function Research.” In lay terms, it simply means manipulating a virus or adding to its capabilities.

There  could be a host of functions added to the corona virus. One of these could be to increase the infectiousness of the virus. Another might dramatically increase the danger to humans who become infected.

And conversely, the virus could be tweaked to be less infectious. These are truly ‘mad scientists’ and I place Dr. Fauci at the very top – being enabled by Bill Gates  et al.

I have read that blood clots are developing in recovered patients of Covid-19. Another side effect which doctors are seeing is a skin infection, actually called “Covid Toes” because it strikes the foot/toes more than other areas of the body. Sometimes it resembles gangrene.

A man who had recovered from Covid-19 had to have his leg amputated because of a blood clot.  Another patient who developed a blood clot in the brain; during the operation to remove the clot, the surgeon noticed long spindly structures hanging off of the clot.

What is going on?

Dr. Anthony Fauci, a member of the coronavirus task force, had previously backed funding for a controversial lab in Wuhan, China, that has been studying the coronavirus in bats, reports said.

Fauci’s National Institute of Allergy and Infectious Diseases had shelled out a total of $7.4 million to the Wuhan Institute of Virology lab — which has become the focus of theories about the origin of COVID-19, according to Newsweek.

The National Institutes of Health, which oversees the NIAID, shut down all funding to the lab last week.

“At this time, NIH does not believe that the current project outcomes align with the program goals and agency priorities,” a deputy director at the agency wrote in a letter obtained by Politico.

There is “increasing confidence” among officials in the Trump administration that the Wuhan Institute of Virology lab is the original site of the virus. A report by Fox News said embassy officials warned in January 2018 about inadequate safety there.

The NIH defended its funding of the lab in a statement to Newsweek.

“Most emerging human viruses come from wildlife, and these represent a significant threat to public health and biosecurity in the US and globally,” the statement read.

“Scientific research indicates that there is no evidence that suggests the virus was created in a laboratory.” source

And that’s Dr.Fauci’s story and he is sticking to it.  Many of us have connected the dots and realize that Fauci is lying to stay out of jail.

I think that jail would be perfect for the doctor, considering that he is an international terrorist.

One thought on “CHINESE Whistle Blower Defects to U.S. and Says Covid-19 Was Made in Wuhan Lab”