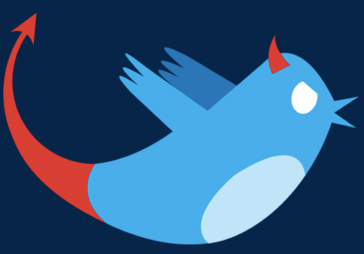 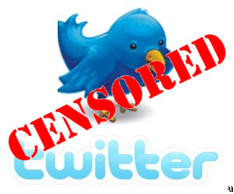 A dear friend of mine stated: “Where there is a double standard, there is a hidden agenda. You need to find it”

If it’s not clear as the nose on your face now, “Big Tech” is one of the largest proponents of serving Satan. Does it surprise you that Twitter takes down postings from the President of the United States of America but allows them from Iran’s supreme leader with impunity?

One thing that upsets me is Injustice. A double standard is an abomination to the LORD.

Differing weights are an abomination to the LORD, And a false scale is not good. (Proverbs 20:23)

I’m not judging nor condemning fellow believers for keeping it (Twitter). In-fact God may have you on that platform to serve Him and His will.  Just be ready to get banned for telling the truth. Remember brethren, if you’re getting persecution for the Gospels sake, you’re being effective against the forces of wickedness. Hang in there, you’re reward will be great!

By God’s perfect standard. Twitter is an abomination to Him.  This news article should make that clear:

US is ‘Satan,’ Israel is its ‘Chained Dog,’ But Twitter Gives Ayatollah’s Tweets a Pass

(CNSNews.com) – Iran’s supreme leader, in a tweet Wednesday that was not flagged, restricted, or blocked by Twitter, called the United States “Satan” and labeled Israel America’s “chained dog,” drawing fresh attention to questions about the platform’s content policies.

“Today more than ever, the interest of the Islamic Nation lies in unity, the type of unity that creates power against enemies and shouts out loudly at the embodied Satan, the encroaching US, and its chained dog, the Zionist regime, and stands up against aggression,” Ayatollah Ali Khamenei tweeted on his English-language feed.

The tweet was a paraphrased excerpt of a speech he gave marking the annual Hajj season.

(In the speech itself, he called for an Islamic unity “that can let out a thunderous cry at the embodiment of Satan – transgressing America – and at its mad dog, the Zionist regime.” He also threatened “bitter consequences” for Muslim politicians who condone Israel’s “survival.”)

The tweet was posted on the same day as a Twitter representative told an Israeli parliamentary committee, in relation to provocative tweets by Khamenei, that “comments on political issues” and “foreign policy saber-rattling” do not generally violate Twitter’s rules.

Ylwa Pettersson was responding to a question about why the platform allows Khamenei’s tweets while it has been restricting some of President Trump’s.

“You’ve recently started flagging the tweets of President Trump,” said human rights attorney Arsen Ostrovsky, taking part in the hearing. “Why have you not flagged the tweets of Iran’s Ayatollah Khamenei, who has literally called for the genocide of Israel and the Jewish people?”

Speaking via video link,https://www.mrctv.org/embed/552236 Pettersson replied: “We have an approach to world leaders that presently say[s] that direct interactions with fellow public figures, comments on political issues of the day, or foreign policy saber-rattling on military, economic issues are generally not in violation of our Twitter rules.”

Lawmaker Michal Cotler-Wunsh, chairing the discussion, interrupted, “Calling for genocide on Twitter is okay, but commenting on the political situations in certain countries is not okay?”

Pettersson did not answer the question directly, but said, “If a world leader violates our rules but [there] is a clear interest in keeping that up on the service we may place it behind a notice that provides some more context about the violation, and allows people to click through if they wish to see that type of content.”

She said that was what happened with Trump’s tweet last May, in which he said – in the context of rioting in Minneapolis – “when the looting starts, the shooting starts.” Twitter at the time limited the tweet’s visibility.

“That tweet was violating our policies regarding the glorification of violence based on the historical context of – of the last line of that tweet, and the risk that it could possibly inspire harm, and similar actions,” Pettersson said.

All you Twitter bots out there.. Heed this warning:

Do homage to the Son, that He not become angry, and you perish in the way, For His wrath may soon be kindled. How blessed are all who take refuge in Him! (Psalm 2:12)

Because HE is coming…