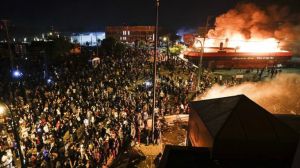 Have you noticed that during the riots, the media is not speaking about “social distancing” or even about the Covid-19 pandemic any longer?

How could the non-stop 24/7 news of Covid-19 which was forced upon us, ad nauseam, for 4 months be pushed aside and replaced by the violence and murder in the streets by ANTIFA?

The leftist media want the sheeple to believe that the massive number of rioters are just locals who are truly protesting the murder of George Floyd.

Of course, there are many genuine protestors of the heinous cold blooded murder of one George Floyd by a police officer. But the truth of the matter is this:  A very large portion of the violent,  brick yielding looters are none other than George Soros’s ANTIFA;  an Anarchist paid group of lawless opportunistic thugs.

Evidently, this is more important than “protecting” the people of America from a deadly disease. And wait – what happened to Social Distancing?

Many of us have been secluded – cloistered in our homes for months. We’ve been threatened with fines and even jail time if we did not comply with the guidelines, mostly established by Dr. Anthony Fauci of NIAID fame.

And by the way – where is Fauci? Haven’t seen him in a while. Well, the left see him regularly on CNN and the other Communist news networks.  Seems that Fauci is upset with our president.

I say good…….stay over on Deep State’s side, Dr. Fauci. We got tired of your daily propaganda show. We were able to discern that you were lying to us.

God gives us that discernment as His children.

Dr. Fauci made sure that church services were no longer acceptable, but we could go to Walmart and the grocery stores wearing masks. I wonder why we could not assemble in our churches wearing masks?

Is it even necessary for me to state the obvious, brethren? Well I will anyway:

We are being played by the Lefty media.

It’s all part of “Rules for Radicals.”  Although Saul Alinsky wrote that book decades ago, it has remained the handbook and bible for Marxist/Socialist thugs to this day.

Here are 13 of Alinsky’s rules:

What Happened to Social Distancing?

Cardenas Ortiz-Sandoval’s mother, Guadalupe, died last month. Cardenas, 22, helped to plan her funeral. She was told by mortuary officials that the state of California would not allow more than ten people to attend her mother’s graveside service. Some family members were forced to stay home. Lifelong friends could not bury a woman they had known for decades. “So many public spaces are open,” Ortiz-Sandoval told CNN, “but a cemetery, which is open-air, is limited to ten per funeral.”

The family of Guadalupe Ortiz-Sandoval did not burn Los Angeles to the ground. They did not start riots. They, and millions like them, did not attend their loved one’s funeral service because the public-health authorities told them not to.

As I write this piece, a policeman is scouring the streets in my ruralish Connecticut suburb, patrolling the neighborhood for congregants and other insubordinates of the social-distancing regime. It is nice outside. Many are sick of sitting indoors, or pacing the streets in solitude. Most have dutifully followed the orders of the public-health officials, epidemiologists, and chart-makers whom the media have coronated as our de facto shepherds through this pandemic.

You remember what they told us. People on the beach? Fools. Three people riding together on a boat in Michigan? Lethal. Tepidly reopening the economy? An experiment in human sacrifice. The virus doesn’t go away because you’re bored. It doesn’t care that you’re grieving, your livelihood is ruined, your business has collapsed, or your spouse is abusive. You can’t pray it away at your church. So stay home, stay safe, and flatten the curve.

And that’s an order.

Unless, of course, you’re protesting racial injustice. Those protesting George Floyd’s death in crowds large enough to fill a small stadium have evaded scrutiny from the same people who told us that Floridians lying distanced on a beach were Literally Killing People. Some elected officials say that these protests are different — that the demonstrators have a good reason to be congregating on the streets. As Bill de Blasio said, the protests are much different from the matter of the “aggrieved store owner or the devout religious person.” They don’t have good reasons to break quarantine. The looters do.

Everyone you know has a “good reason” to break quarantine. Some wish to bury a relative, while others want to visit a lonely elder in a nursing home. Parents want to baptize their children to save their souls, and first-generation college students want to attend graduation. All of them were told to abstain from these things in the name of public health. Following those orders had human costs — rates of domestic violence increased during the lockdowns. Calls to suicide hotlines skyrocketed. Millions were thrown out of work. Businesses built over generations filed for bankruptcy, Some will never recover.

Those who protested the lockdown regime were ridiculed. Governor Gretchen Whitmer in Michigan said that anti-lockdown protests came “at a cost to people’s health.” Michigan nurses stood in front of protesters’ cars with folded arms, leering on in contempt. As hordes of looters and rioters turned to the streets, however, NPR informed us that “dozens of public health and disease experts have signed an open letter in support of the nationwide anti-racism protests.” Nurses in New York stood outside a hospital and cheered as protesters, some of whom were unmasked, packed together like sardines and marched through the streets to protest police brutality. The chair of the New York City Council’s health committee, Mark Levine, says that “if there is a spike in coronavirus cases in the next two weeks,” we ought not to “blame the protesters. Blame racism.”

If we shouldn’t “blame” them, then we ought not “blame” the regular people who break quarantine to mourn their dead. If it’s true, as the experts told us, that the virus does not discriminate, and does not care how trying your personal circumstances are, then the virus certainly does not care about how unjust the Minneapolis police department may be. If no “open letter” of apology from the “medical community” is forthcoming to the bereaved who stared at their casketed relative on an iPad, the least that those officials can do is admit that they never really cared about the lockdowns at all. source

So brethren, what are we to believe?

I cannot tell you what to believe. I can only give you my take on what is happening before our eyes.  We are definitely being played by the Left.  From the beginning of January of 2020, a massive planned attack was unleashed on the American people.
You may ask me to what end this attack was perpetuated upon us?
To me, this could not be more clear. The powers that be who really do run this world, were bound and determined to destroy America and bring down our president.
The Left are frightened of a repeat of 2016, when Donald Trump shocked the world by defeating Hillary Clinton. The Left believed that she was a shoe-in.

What will happen in November?

Whatever God ordains will happen this November. He alone is in full control.

“Daniel answered and said, Blessed be the name of God for ever and ever: for wisdom and might are his:  And he changeth the times and the seasons: he removeth kings, and setteth up kings: he giveth wisdom unto the wise, and knowledge to them that know understanding: He revealeth the deep and secret things: he knoweth what is in the darkness, and the light dwelleth with him. (Daniel 2:20-22).

And we must trust Him all the days of our lives. Share His glorious Gospel with the lost while there is still time.

How Can I Be Saved?
Shalom b’Yeshua
MARANATHA!!!

3 thoughts on “Social Distancing is Still Mandatory Unless You are Looting, Rioting or Starting Fires”