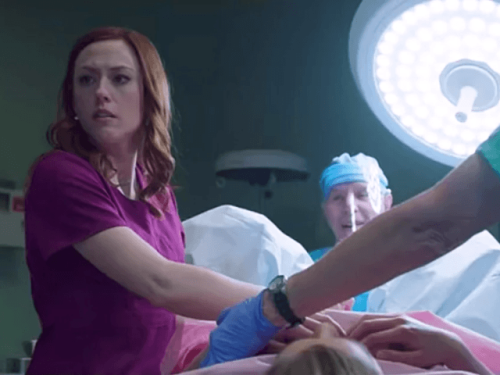 It doesn’t surprise me one bit that this is happening in Canada.  I feel so bad for our Canadian brethren who are under the Leftist tyrannical thumb of Justin Trudeau.  I actually think that Trudeau just might be worse than Obama. I don’t think that I’ve ever said that before.

Think about it – death threats to owners of theaters who have the audacity to show “Unplanned.”   Yes – Unplanned is a movie produced to open the eyes of the American politically correct; to show them that these are little people who are being ripped apart and often sold for their parts. That’s MORE than a Death Threat!

Police have been called in to investigate allegations of death threats made to cinema theater owners in Canada who had scheduled to screen the pro-life movie Unplanned.

B.J. McKelvie, president of Cinedicon, the Canadian distributor of the film that tells the story of Abby Johnson, a former Planned Parenthood manager-turned pro-life activist, confirmed two Canadian independent cinema owners reported threats that caused them to be “fearful for their families,” said LifeSiteNews.

Yet another independent theater owner was reportedly “harassed to the extreme.”

Chuck Konzelman, one of the film’s producer-directors, reportedly said McKelvie requested, for the sake of safety, the film’s producers remove from their website the July 12 listing of 46 Canadian theaters that will be screening the movie.

According to Kelowna Capital News, threats were reportedly made against theater staff via social media in Shuswap, British Columbia, prompting the theater to cancel the film’s screening.

The staff of Salmar Theatres reported the threats and Salmar Community Association board member Chris Papworth confirmed Thursday the board agreed to cancel the film’s scheduled five-day run that would have begun July 12 at the Salmar Classic.

“We have a track record of showing things from a variety of points of view … we try not to preclude things because of whatever personal opinions may exist on our board or something like that,” explained Papworth.

What’s different here … certainly in the past, there hasn’t been an effort to dox employees or, specifically, the general manager, by releasing their personal information on social media and then encouraging people to go after them as the one responsible for some heinous act,” he added. “We just aren’t prepared for those levels of hostility towards our general manager.”

In Shuswap, the screening of Unplanned had been organized with the support of members of the local Pro-Life Society.

“If they had just come out to picket while the movie is running, I could accept that,” said Hildegard Krieg, Pro-Life Society spokeswoman. “But I cannot accept that they should actually threaten somebody with violence personally and the family. That is absolutely uncalled for. A peaceful picket, OK, we walk through the picket line. But that is going too far.”

Krieg said an alternative plan would be for the Pro-Life Society to have a private showing at the Classic. source

So these thugs are threatening the cinema owners.  They are being paid to do this. I hope that you know that.  Soros and his despicable NGO’s are ALWAYS being ever evil in the West.

Pray for the Lord to protect these people. Pray that many of them would come to Christ because of this.  Pray for Canada!!  Pray for Trudeau (God is able).

Are these people possessed?  Many times I do think so.  Or is this the evil which lurks inside of unrepentant sinners?

I am praying for a miracle to happen in Canada!