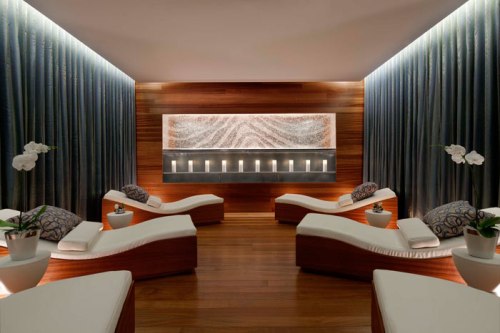 Satan’s worker bees have taken Evil and Murder to a whole new level.

They are doing away with sterile surgical surroundings in abortion clinics.  As I looked closely at the photo of the Spa-like room, I imagined soft New Age music that one would associate with Yoga.

And is it just me – or does anyone else see the photo above as an altar of sorts?

Molech must be so pleased.

Did you notice that the room accommodates many women?  No more shutting the woman away in private rooms. After all – to these devilish people, abortion is to be celebrated; and what better way to rejoice in the killing than to provide a “party” atmosphere?

How much more incessant evil are we to bear in this wicked world?  I do trust the Father that He will send Jesus at the appointed time. But I must tell the reader that I come so close to shutting down at times like these.  I know that we are to occupy and continue our work for the Lord until He comes.

O Lord – please give us the strength and the fortitude to carry on!

An abortion clinic opened north of Chicago Tuesday and seeks to normalize abortion in Illinois with pink and purple exam rooms, mints, tea bags and more.

Carafem Health Center opened in Skokie, Illinois, and offers abortion services up to 13 weeks in pregnancy. The clinic charges $475 for medication abortions and $550 for aspiration abortions.

The clinic will provide patients with bags of tea and mints among other items so that they feel as welcome and normal as possible. “While abortion is a common medical procedure, there’s stigma attached to it,” Carafem Director of Operations Kat Boyd said, according to the Chicago Tribune. “We try to create an atmosphere that’s warm, welcoming and normalizing.”

The newly opened abortion clinic has advertised on social media but has not yet advertised in hard copy and on billboards. “I can’t imagine we’re going to be quiet,” said Boyd, who explained that the company hasn’t yet decided on its physical advertising in the Chicago area, according to the Tribune.

After Carafem sought to run an ad touting the “10-week-after-pill” in 2016, D.C. transportation officials blocked the advertisement, prompting a legal battle to begin. The American Civil Liberties Union represents Carafem in a continuing battle over the ad. Transit officials did accept a different Carafem ad, however, reading, “Abortion. Yeah, we do that.”

The new Illinois clinic will soon join local insurance company networks in order to provide abortion services that are covered by insurance so that patients will not have to pay the full cost of an abortion, according to Boyd.

“[Abortion] stigma comes from what is the destruction of human life,” said Chicago’s Pro-Life Action League Executive Director Eric Scheidler, the Tribune reported. “No abortion rhetoric is going to change the basic injustice of abortion.”

Illinois law bans abortion after the point of viability except in cases where the mother’s life is in danger or the unborn baby won’t survive after birth. Health care professionals can refuse to provide abortion services for religious or moral reasons.

“I do think when our human rights are being basically dismantled that people are stepping up and taking more bold and public action,” Abortion Care Network Executive Director Nikki Madsen said. “They’re really stepping up to say we are here, we are visible, and we want you to know where you can get care that you can trust.”

Carafem offered a Valentine’s Day special for 72 hours following the romantic day so that women could get the Plan B emergency contraception pill for only $10.

Illinois has more than 20 abortion clinics. Planned Parenthood operates 17 of those clinics. source

A Valentine’s Day special?  Is this not blatant Satanic Evil?

Pray that the abortionists will have nightmares every night; that God will allow them to experience the horror and pain of an abortion in these night mares.

Pray for the women who are contemplating an abortion. Pray that a pro Life friend will speak with them about the miracle growing within them, and they might change their minds.

Brethren, let us pray for one another in this dark hour.

The Restrainer, which is the Holy Spirit, Who lives within God’s children is holding back the EVIL which will grip this earth during the Tribulation.  Can you even imagine when we are taken by our Lord Jesus in the Rapture – can you fathom the Evil which will permeate this whole earth at that time?

I pray that we do not have much longer to wait for our Lord.

5 thoughts on “Abortion Spa With Tea and Mints: Perhaps a Relaxing Pedicure?”