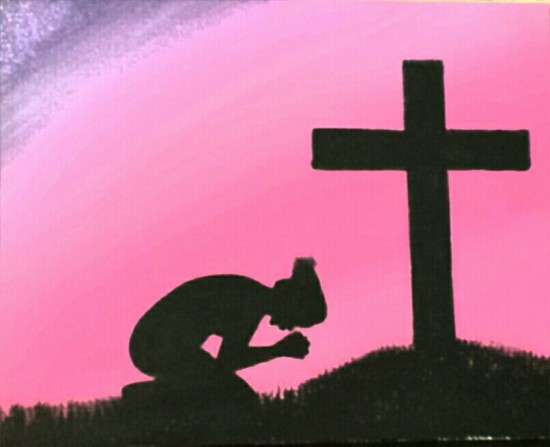 You know that voice which says “Oh, why don’t you just give it up?  You know that person will  NEVER come to Christ!”

Up until a year ago, my oldest sister Sandy had not talked to me for over 20 years. She is 7 years older than me, and I would tear up when I thought that she could die and I wouldn’t even know it.  I shared the Gospel with her many years ago.  The sister between myself and Sandy poisoned her towards me.  I thought it was hopeless. I almost walked away from the whole thing.

But then I remembered the Scripture above which speaks of God’s Omnipotence. I prayed to Him that He would reunite Sandy and myself. Then I felt led to ask my prayer warrior brothers and sisters on FB if they would pray with me for this.  Many said they would.

The Beginning of the Miracle

Sandy had not blocked me on FB as my other sister had done.  One day, after taking a deep breath, I wrote a message to her.  I told her that I wanted to speak with her and hoped that she felt the same.

She wrote back and told me that she would talk with me on one condition – no politics or talk of Jesus.  I told her that would work. I said that I just wanted to be able to have a relationship with my big sister.

I never really got to know Sandy when we were young.  She got pregnant and left home at 17 – I was only 10. But as we began talking on the phone, we laughed until we cried.  Hardly a week would go by that we didn’t talk at least once or twice.

Sandy’s husband has advanced Alzheimers and is in a home now. Last summer, Sandy asked if I would like to come up to visit her. She had not been well and I could tell that she was getting worse.

When I arrived, it was absolutely amazing. It was as if the Lord had poured His love into both of our hearts.

Her condition concerned me greatly.  I told her that I would drive her to her doctor if she would make the appointment.  When we got there, her doctor listened to her lungs and told Sandy that she had pneumonia.  It was absolutely God’s providence that I was there for her – at this point she was not driving  She was put on various medicines and she was quite confused because of her condition.  I helped her to organize the medicines and her vitamins.

It amazed me how the Lord sent me to her at just the right time.  But should that amaze me?  Everything He does is incredible and always right on time. By the end of the week, the antibiotics had kicked in and her other meds were working.  Tim picked me up to return home.

A friend of Sandy’s where she lives traded cell phone numbers with me so we’d keep in touch. She is a doctor and also a sister in Christ. She has been sharing with Sandy too.  Her name is Carol.  She loves Sandy a lot.

About a week after we got home, Carol called me and said that something was terribly wrong with Sandy and she was taking her to the ER.  The pneumonia had not cleared up and Sandy’s liver and brain were being affected.  She developed Encephalopathy (swelling of the brain).  The doctors gave Sandy antibiotics intravenously. After she improved, Sandy was put into a rehabilitation facility to regain her strength.

Tim and I went up to the rehabilitation place and brought Sandy some things she needed.  She was still so weak and a bit confused, but very happy to see us.

A Christmas I will never forget

Sandy was finally strong enough to travel.  We invited her to spend Christmas with us. She was so excited!  I read the Christmas story from Luke and I could tell that Sandy was really listening.  She was loaded with questions for me about the Lord.

She found the tract called “Gone” in the guest room.  She wanted to know what it was about. I told her all about Kristin and how she died from an aneurysm. I told her that she went immediately to be with Jesus because she had repented and trusted Him before she died.

I told her about our dad, and how at the end of his life, he watched Billy Graham Crusades and would write letters to me from Florida about the Lord. I told Sandy that on his last night before he died, that I led him in prayer to Jesus.

I could see my sister’s heart was softening.  She began to tell me that some of her grandkids were searching for the truth about Jesus. When she told me this, I could see excitement in her face.

I have to say that at certain times when Sandy was with us, it almost felt like a dream.  But I knew that God had orchestrated everything  from the Summer visit at her home, to the Christmas visit at our home.

My Faith has been Strengthened

I talked with Sandy today. She told me that she could hardly wait until I come up and visit her again. She said it was an open invitation.

And I will go.  God has given me everything I need to lead my sister to Him.  She needed to see the Love of Christ in me and Tim. She knows that we sincerely love her and that we’d do anything for her.

If someone had told me over a year ago that this would be happening now with my sister – I would have told them that I didn’t have the faith to believe that.  But God gives us faith when we trust Him and His Word.

He spoke the Universe into existence – why in the world should this be difficult for Him?

Will you consider praying for Sandy to be saved?

Brethren, His Eye is on the Sparrow……

7 thoughts on “Don’t EVER Stop Praying For Your Loved Ones: GOD is Able”